Bob Kopp, Associate Professor in the Department of Earth & Planetary Sciences and  Associate Director of the Rutgers Energy Institute, was featured in the following articles from Feb. 22, 2016:  "Seas Are Rising at Fastest Rate in Last 28 Centuries"

The Catalysis Society of Metropolitan NY is pleased to announce its annual Spring Symposium being held on Wednesday, March 23, at Rutgers, New Brunswick. Details for the symposium, including the speaker list, can be found at   http://nycsweb.org/index.html

Through the generous sponsorship of this event by the Rutgers Sustainability Committee, all Rutgers-affiliated attendees (faculty, students, post-docs) who register before March 16 will have their registration fees waived. Please select $0 option at registration. After March 16, regular registration fees apply.

Food waste is the largest portion of our waste stream,  making up 21% of the material that is discarded. However, only 5% of the food  waste generated is recycled.  Converting source separated food waste into  clean energy, fertilizer, and organic soil amendments can reduce odor and  methane emissions from landfills and can help generate low carbon electricity  to displace water intense fossil energy-based electricity. These  technologies are available, and widely used, in other countries to turn this  solid waste problem into environmentally and economically sustainable projects.

This conference  will share lessons learned from successful food waste-to-energy projects and  address the challenges in establishing this industry in New Jersey. Topics will  include feedstock quality and availability, conversion technologies, siting  options, regulations and policies and generated power and others end product  sales.  The goals of the conference will be to inform participants about  current state-of-the-art anaerobic digestion (AD) technologies and to identify  the steps needed to overcome the barriers to development of a food  waste-to-energy industry in NJ.

Students must submit abstracts by Friday,March18,2016- For Free Registration

Prof. Dismukes is the Principal Investigator of an award from The Global Climate and Energy Project

Prof. Charles G. Dismukes is the Principal Investigator of an award from The Global Climate and Energy Project, totaling $1,220,127. The three-year Project titled:  Robust Microalgal Production Strains for High Yield Growth on Fossil Flue Gas: Toward Cost Effective Biofuels and CO2 Mitigation. This project aims to develop microalgal strains for high carbon dioxide (CO2) and high temperature tolerances, along with increased lipid yields, through random and targeted mutagenesis. A major collaborator on this project comes from Co-PI Dr. Jun Cheng at Zhejiang University, China, where the engineered strains will be evaluated for mass production. The Rutgers’ project benefits from a collaboration with Prof. Christoph Benning at Michigan State University, who is developing genetic engineering strategies for Nannochloropsis oceanica.

Applications are now being accepted for the 2016 C3E Poster Competition!

Female undergraduates, graduate students, and postdoctoral scholars conducting research in clean energy are invited to apply! Entrants with the most compelling posters will be invited to attend the 2016 C3E Symposium on May 31st at Stanford University to showcase their work.

The C3E Poster Competition is now in its fifth year and is building on prior competitions hosted by MIT. The Competition helps C3E spread its reach to all age groups and involve early- and pre-career women in the annual Symposium. The Competition also helps expose Symposium attendees to cutting-edge research in a variety of clean energy fields.The topic of the poster must relate to clean energy, but can be in any of the following areas:

Applications and posters are due February 22nd at www.C3Eawards.org. You do not need to be U.S. resident to apply. Learn more about eligibility and requirements here.

Rutgers was chosen by the U.S. Department of Energy to be 1 of 8 regional schools hosting CleanTech student innovation contests this spring and will be awarding one winning team in our region with a $50,000 prize. Rutgers Business School students from the Rutgers University Venture Capital Club (RUVC) were members of a Rutgers team that entered a Department of Energy collegiate competition to fund clean energy startups on college campuses.

Their proposal was titled: Mid-Atlantic Regional CleanTech University Prize (MARC-UP).  Read the project summary and list of team members below.

Professors from engineering, science, and RBS are acting as mentors.  The student leaders of RUVC are Aaron Weber and Doron Scheffer.

LaunchR is the Rutgers student-run clean technology startup accelerator funded by the Department of Energy. They are focused on connecting young, budding innovators in the green technology space through mentorship and workshops. At the end of the program, expert judges will reward the most promising company in the program with a $50,000 prize.

The Rutgers EcoComplex was awarded a Rural Business Development Grant of $19,000 by the USDA Rural Development Office to perform a technical and economic feasibility study of co-digestion of food waste and dairy manure at Fulper Family Farms, located in West Amwell Township.

The Department of Energy's Bioenergy Technologies Office funded the BioEnergy Atlas
tools, which include the BioFuels and BioPower Atlases. These tools are
designed as a first pass visualization tool that allows users to view many
bioenergy and related datasets in Google Maps. Users can query and download map
data and view incentives and state energy data, as well as select an area on
the map for estimated biofuels or biopower production potential.

Cleaner Cars from Cradle to Grave (2015)

What are the global warming emissions of electric cars on a life cycle basis—from the manufacturing of the vehicle’s body and battery to its ultimate disposal and reuse? To answer this, the Union of Concerned Scientists undertook a comprehensive, two-year review of the climate emissions from vehicle production, operation, and disposal. They found that battery electric cars generate half the emissions of the average comparable gasoline car, even when pollution from battery manufacturing is accounted for.

The 2016 ARPA-E Energy Innovation Summit will take place from February 29 – March 2, 2016 at the Gaylord Convention Center just outside of Washington, DC. The Student Program is a great opportunity for graduate level energy leaders to network with companies searching for new talent and learn about new energy initiatives. ARPA-E will select 100 graduate-level students to participate in this program. Please encourage Rutgers’ student energy leaders to apply.

The application portal is now open and the deadline is December 4, 2015.

The Department of Energy (DOE) recently released a new, 10-year strategic plan for materials and chemical sciences research, entitled “Challenges at the Frontiers of Matter and Energy: Transformative
Opportunities for Discovery Science.”

In addition to presenting the continued progress made over the last year in these areas, this year’s update goes further. Two separate sections now cover large, central, utility-scale PV plants and smaller, rooftop, distributed PV systems to highlight how both have achieved significant deployment nationwide, and have done so through different innovations, such as easier access to capital for utility-scale PV and reductions of non-hardware costs and third-party ownership for distributed PV.

Along with these core technologies, this update briefly introduces three additional technologies on the cusp of wider deployment and cost reduction in the coming years: smart building systems, fuel-efficient freight trucks, and vehicle lightweighting.

Undergraduate student Ajay Kashi has won first prize in the student poster competition at the 2015 AICHe National Meeting in Salt Lake City. Ajay Kashi is a Chemistry and Chemical Biology major conducting research in the Dismukes Laboratory under the mentorship of Dr. Anders Laursen. Ajay attended the meeting to present his research conducted this past summer supported by a Rutgers Energy Institute (REI) Summer Internship on “Scalable Synthesis of Nanoscale Ni5P4 As a Novel HER Catalyst: Investigating the Correlation Between Particle Size and Electrochemical Activity”. 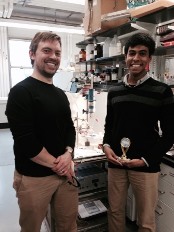 Ajay said "My internship with the Rutgers Energy Institute not only gave me a taste of what it feels like to do truly independent research at the graduate level; it also reaffirmed my longstanding desire to pursue a path toward further education in the field of alternative energies and renewable fuels."

Dr. Laursen proudly stated that "Ajay's work relates in a very direct way to the energy problem currently facing our society. Renewable electrolysis of water is a potential corner stone for the sustainable society and realizing this technology will require the very best young minds. His work focused on how to scale up the production up one of the  most promising catalyst, which will help guide our future research toward achieving renewable energy storage in the near term."

Six undergraduate interns, ranging from across the many fields of energy expertise at Rutgers, researched and explored their topics for 12 weeks this summer on our Rutgers Campuses. At the close of the program, each intern made a presentation and wrote a short research paper, for a day of interdisciplinary learning.

Over the programs five years, students work has been published in prominent journals.

The National Business Incubation Association (NBIA) has awarded the NBIA Soft Landings International Incubator designation to the Rutgers EcoComplex Clean Energy Innovation Center, a business incubator located in Bordentown, New Jersey. The Rutgers EcoComplex becomes the third active Soft Landings incubator in New Jersey; the Rutgers Food Innovation Center, which focuses on the food and agribusiness sector, and the Enterprise Development Center at the New Jersey Institute of Technology (NJIT) also have the designation. Through its Soft Landings program, NBIA recognizes business incubation programs across the world that offer specialty services to help foreign companies enter into their domestic market. The Rutgers EcoComplex was selected for the program because of its slate of business services for nondomestic firms and its demonstrated success at helping these firms enter the U.S. market.  The EcoComplex has successfully worked with international companies in areas of environmental and alternative energy innovation.

A recent Rutgers University assessment on bioenergy potential in New Jersey found that the state producers over 7 million dry tons of biomass annually, over 4 million of which could be recovered and used to generate power, heat or vehicle fuel.

Dr. Serpil Guran, Director of Rutgers EcoComplex and REI member, speaks on sustainable biomass and use of waste on WMBC-TV.

Video Climate Change: Change our Lifestyles or Change the Planet?