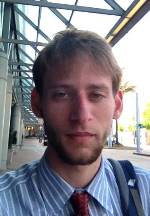 Paul Smith is a fourth-year graduate student at Rutgers University. He received his undergraduate degree from Gettysburg College, where he double majored in Math and Chemistry. He is now a participant of the Rutgers IGERT program.

Chris Kaplan is a senior undergraduate student at Rutgers University, where he is completing a major in Chemistry with minors in Math and Comparative Literature. He has received funding from the Aresty-Chemistry Scholars program.

Q: Please briefly describe your research. Our lab works on making catalysts for new sources of renewable energy by splitting water into hydrogen and oxygen. We use photosynthesis as a guide to build these catalysts, since photosynthesis is currently the most efficient method to split water. Nature also uses highly abundant materials for the process, so while some rare metals can split water, they are not widely scalable materials for industrial use. In addition, photosynthesis is capable of renewing itself about every 20 minutes, while its man-made counterparts typically decline in efficiency over time. Remarkably, every organism that conducts photosynthesis splits water in the same way, so there is only one model in nature for the process. Professor Dismukes assisted in determining the catalyst used in photosynthesis, which has a cube-shaped structure on the molecular scale. If that is the best catalyst, we should be able to design materials that look like cubes on the atomic level, and those would be ideal catalysts.

However, turning water into oxygen is a difficult process that requires stable materials; oftentimes, abundant minerals are used. We use smaller pieces of the bulk materials in order to understand the process. Essentially, smaller units serve as models for the bulk systems and we use discrete parts of bulk catalysts to study how they work. In general, the molecular catalysts we work with are used to garner a theoretical understanding of the bulk catalysts. We recently synthesized a series of cube-shaped cobalt-based clusters that were tested for catalytic activity. In other words, we tested whether or not they could split water in order to find a link between structure and function.

Chris started with a larger structure and cut it into smaller and smaller pieces in order to find the threshold at which the catalytic activity was no longer present. He was able to do this while keeping almost all the other parameters constant, which allowed us to present a relationship between the two conditions with a minimal threat of interfering variables. We generally found that you need the intact cubic structure for the catalyst to function.

Q: How did you come to be involved in this research?

Chris: Shortly after I became interested in chemistry, I was reading a book on the subject at a bus stop when Dr. John Sheats approached me and we began to talk. Dr. Sheats has a very interesting way of describing different reactions by ascribing them personalities. Most strikingly, he described chromatography as a Polish wedding: if you don't know anyone you move straight to the food, but if you do, you're hung up for hours. Needless to say, we had a long conversation, which led to Dr. Sheats introducing me to his collaborator, Dr. Dismukes, and eventually a position in this lab.

Paul: I applied to graduate school at Rutgers, and I was accepted. Professor Dismukes was the first researcher I spoke to when I arrived, and his description of his work was the most appealing to me. His research operates on a national scale: his work receives national attention and he has international collaborations. After talking with Professor Dismukes, I was eager to work on a project that operates on a national and even global scale to solve a problem that is so prominent in today's society.

Q: Where do you see your research fitting into our energy future? The concept behind our research is that once you find how the mechanism works, you know which parameters to optimize in order to maximize efficiency of the product. The photosynthetic cluster is the model to follow, so research into man-made catalysts using different materials, like cobalt, would help us optimize the cost-efficiency and function of the water conversion process until we approach a system close to the model nature has provided. The ultimate goal is to have a series of electrolyzers¾ a solar array where sunlight comes down, hits a semiconductor, and catalysts in separate chambers split water, which flows throughout the apparatus, into hydrogen and oxygen.