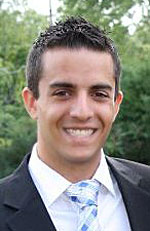 Peter Lobaccaro is an intern with the Rutgers Energy Institute for the summer of 2010. He is working concurrently with the research groups of G. Charles Dismukes and Tewodros Asefa. He originally hails from Holmdel, NJ and is currently an undergraduate at the University of Notre Dame, where he is going into his senior year.

Q: Please briefly describe your research.
My research is currently in the area of oxygen evolving catalysis. A major goal in energy research is the green production of hydrogen gas. Hydrogen gas is commonly produced by a process known as electrolysis. In this process electrical potential is used to drive the splitting of water molecules into hydrogen and oxygen gas. However, the hydrogen economy will never exist as long as the current methods of electrolysis are the only manners in which to produce hydrogen.
The major limiting factor of electrolysis, and the reason why this process is so energy-demanding, is the oxygen evolution half reaction. Splitting water to make hydrogen cations and oxygen gas is an extremely uphill process. The main task of the research in this lab is to find catalysts which decrease the amount of energy required to drive this half reaction. These catalysts can then be combined with solar cell technology to either photochemically split water or to perform sun powered electrolysis. My research is directly involved in the taking of these catalysts and integrating them as a more durable and reliable component of an electrolysis system. Electrolysis requires two electrodes, a cathode and an anode. Oxygen evolution occurs at the anode and thus the catalysis must be present at this electrode. My goal it create intimate and high surface area contact between the catalysis and a conducting electrode in order to produce a durable anode for water electrolysis.

Q: How did you come to be involved in this research?
I came to be involved in this research due to similar research into solar cell technology I am involved in at Notre Dame. There I also work on projects involving water splitting; however, we focus more on the photochemical splitting instead of the catalysis. I became interested in the work both Prof. Dismukes and Prof. Asefa are doing by researching online. I then contacted them about conducting a summer research experience here, and because I am a New Jersey resident, was able to apply for an REI position.

Q: Where do you see your research fitting into our energy future?
This research is a vital part of the overall picture of our future. Viable green sources of energy must be found to replace fossil fuels. By viable I mean that these energy sources must not only protect our environment but be the economically sound choice. Green energy will never exist in any substantial fashion until it can compete with the price of fossil fuels. Ideas like the hydrogen economy will never exist until problems like the fuel cell efficiency and hydrogen production are solved. These catalysts being discovered here will allow the hydrogen economy to become a reality. By reducing the energy required to split water, sunlight can be used to power electrolysis, thus making hydrogen a truly green energy source. This will be one crucial part of the overall picture of our energy future, where green energy will no longer be an idea, but rather, it will be a product.