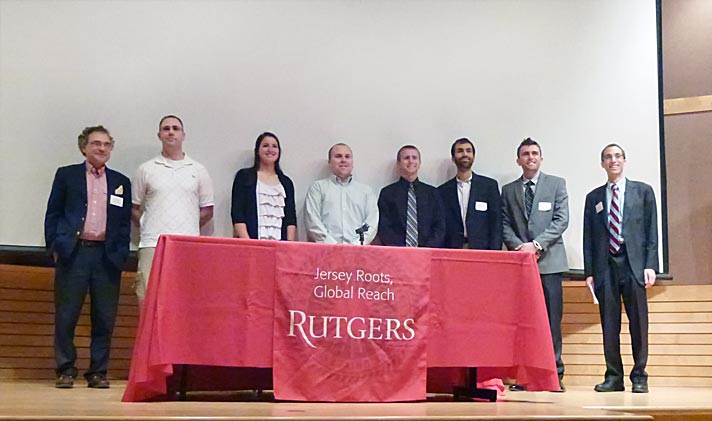 Major(s) Bioenvironmental Engineering (all). Abstract: RU Trash to Treasure Chest gives students a better alternative for disposing of their unwanted items. The program will collect these items and sell them to students and community residents at a given date. Any leftover items will be donated to a charitable foundation, who will pick up the items themselves. It has been estimated that Rutgers would prevent 53 tons of waste from being landfilled each year. Based on 53 tons and 2.8 mpg (Inform Inc.), it is estimated that 39.6 gallons of diesel fuel will be saved through eliminating landfill trips. A total of 1.5 million kWh in energy reduction will be realized by implementing this program.

Major: Materials Science and Engineering Minor: Psychology. Abstract: An opportunity exists at Rutgers University to implement a piezoelectric energy harvesting floor in the Busch Campus Center. The volume of foot traffic in the main hallway provides a great opportunity to promote energy awareness, while harvesting energy normally wasted. The main goal is to increase awareness of sustainable practices, which is accomplished through the floor itself and the two demonstration events through the first year. The harvested energy is on the order of 7 kWh per day, which is enough offset of the energy associated with the television displays that track the cumulative energy generated.

Major(s): Bioenvironmental Engineering (all). Abstract: Given the opportunity presented by our large campus community here in New Brunswick, the authors of this proposal suggest that the University first partner with local institutions to consolidate their organic waste streams. With a combined waste stream of approximately 29 tons per day during the Spring and Fall semesters and 19 tons per day during the summer and winter breaks, the authors of this proposal demonstrate how installing and operating an anaerobic digester that feeds the campus cogeneration plant with refined biogas to produce energy would be a viable investment. Despite significant capital and operating costs, a digester system producing biogas, electricity, recoverable heat and marketable compost would be a cost effective and profitable method of disposing the University’s organic waste as well as generating alternative energy.