Can We Engineer a Way Out of Climate Change?

Read what Alan Robock of the School of Environmental and Biological Sciences and member of the Rutgers Energy Institute (REI) has to say about the dangers of tinkering with the environment to fight climate change in this New York Times Magazine story.

Appointment of Robert Kopp, Director of the Institute of Earth, Ocean and Atmospheric Sciences (EOAS)

We are  pleased to announce the appointment of Professor Robert Kopp as director of the Institute of Earth, Ocean and Atmospheric Sciences (EOAS). Bob will begin in his new role July 1.

We also want to acknowledge the dedicated efforts of the outgoing director, Professor Mark Miller of the School of Environmental and Biological Sciences’ Department of Environmental Sciences, who has served as the founding director of EOAS and has played a crucial role in shepherding EOAS through its first three years.

Since its establishment in 2014 as the successor to Rutgers’ Institute of Marine and Coastal Sciences, EOAS has united faculty, researchers, and graduate students studying Earth’s interior, continents, oceans, atmosphere, and biosphere, their interactions throughout Earth history, and their effects on human civilization today. EOAS faculty are at the forefront of research on planetary habitability and history, Earth observations and forecasting, climate and ecological risks, and polar change.

A professor in the School of Arts & Sciences’ Department of Earth & Planetary Sciences, Bob will bring to EOAS a transdisciplinary perspective that links geology, oceanography, atmospheric science, statistics, and public policy. Since arriving at Rutgers six years ago, he has served as an associate director of the Rutgers Energy Institute. He currently directs Rutgers’ new, NSF-funded graduate traineeship in Coastal Climate Risk & Resilience (C2R2), which is managed by EOAS in partnership with the Bloustein School of Planning & Public Policy and the School of Engineering.

Bob’s research focuses on understanding uncertainty in past and future climate change, with major emphases on sea-level change and on the interactions between physical climate change and the economy. He is a lead author of Economic Risks of Climate Change: An American Prospectus and of the U.S. Global Change Research Program’s 2017 Climate Science Special Report, a member of the National Academies’ recent Committee on Assessing Approaches to Updating the Social Cost of Carbon, and a contributing author of the Intergovernmental Panel on Climate Change’s 2014 Fifth Assessment Report. Prior to joining the Rutgers faculty in 2011, Bob served as an AAAS Science & Technology Policy Fellow in the U.S. Department of Energy’s Office of Climate Change Policy & Technology. He is a past Leopold Leadership Fellow and a recipient of the International Union for Quaternary Research’s Sir Nicholas Shackleton Medal and the American Geophysical Union’s William Gilbert Medal.

On April 25, faculty, staff, and students attended the 24th annual Celebration of Excellence for the School of Environmental and Biological Sciences and the New Jersey Agricultural Experiment Station held at Neilson Dining Hall. 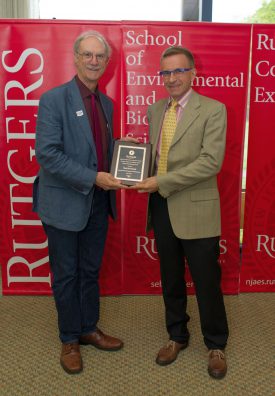 Max obviously likes to travel.  Born in Finland and now living in New York City, he not only commutes every day to work but also regularly travels the world to research and to teach.  As one of the world’s foremost experts on environmental microbiology, he has since 2001 led an international research team focused on Arctic microbial ecology.  He has been a visiting professor at the Chinese Academy of Science and at the Forest Research Institute in Finland.  He initiated the first International Conference on Polar and Alpine Microbiology and has served on the Organizing Committees and Scientific Boards for all subsequent meetings.  As the chief editor of the journal FEMS Microbiology Ecology, he leads an international team of editors.  In the last two decades, he has published more than 50 papers with international collaborators.  Max has taught courses in Finland, India, China, Germany, Italy, Peru, and Vietnam; he is currently a US-Faculty Scholar for the Vietnam Education Foundation and was appointed a US-Indo Professor by the American Society for Microbiology.  And he has earned the admiration and jealousy of all his faculty colleagues, as well as the thanks of many Food Science students, for convincing the School to send him to the south of France every spring to offer the course Microbiology and Culture of Cheese and Wine.  For his energy and his enthusiasm for international research and education, we are pleased to honor Max Häggblom with the 2017 International Excellence Award.  As a long standing member of the Rutgers Energy Institute (REI) we express our congratulations to Max. 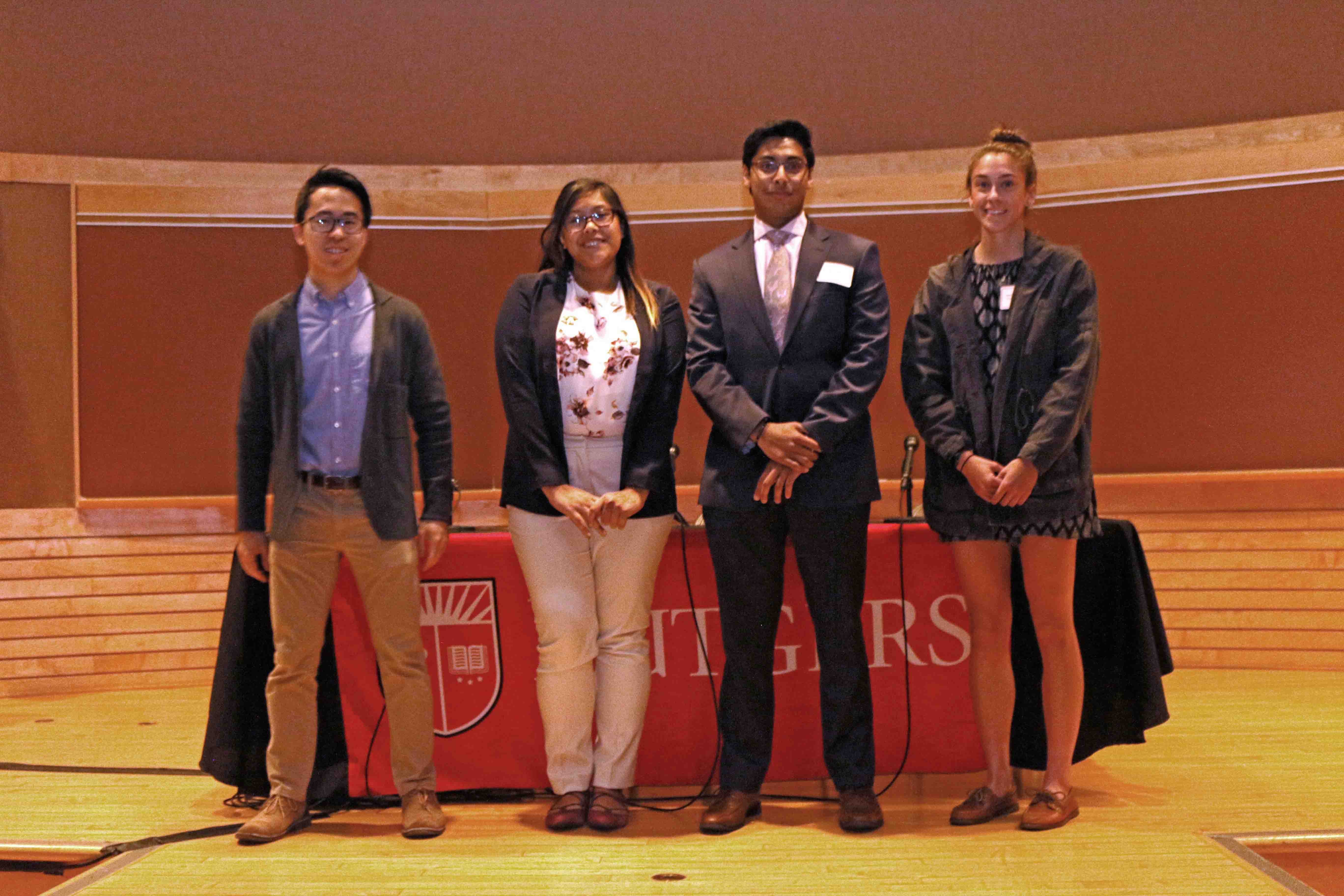 The three winning entries were awarded prizes at the 2017 REI Annual Symposium.

Abstract:  Our team plans to implement smart power strips into all the on-campus residence halls before the start of the upcoming 2017-2018 academic year. These smart power strips prevent standby power consumption - which is the electricity a device consumes when it is “off”, but still plugged in. At approximately $10 per power strip, they can save around 5,000,000 kilowatt-hours and $540,000 per year. These power strips will change how the average student consumes electricity, and is a simple yet efficient way to save energy, money, and the environment.

Abstract: The proposal is a game that would incentivize recycling in on-campus dorms and apartments. The proposed game involves the use of an app on students’ phones that would keep track of the amount they recycle, and would compare their stats to other students in their same building. At the end of every two-week period, top leaders would receive a monetary prize, and the game would reset at the beginning of the next two-week period. The goal of the game is to increase the amount recycled per student at the university, which would increase energy savings as a result. When recyclables are used to create products, the amount of energy necessary is significantly less as compared to using raw resources. Other benefits of the implementation of this game include an improved public image in terms of Rutgers’ environmental awareness as well as decreased pollution and green house gas emissions. Overall, the game helps work towards Rutgers’ goal of becoming carbon neutral by 2030 in a way that makes recycling more fun and appealing to students living on-campus.

Abstract:  Using a systematic approach to modeling the current bus transportation system, a streamlined and more efficient bus transportation network is proposed to decrease the size of the Rutgers transportation fleet from ~50 biodiesel buses to ~40 electric buses. The environmental and financial impact of the transition from biodiesel buses to electric buses is also analyzed and presented in this proposal. Over a 12-year period, switching from the current biodiesel fleet to an all-electric bus fleet can prevent 23,640 metric tons of CO2 gas emissions and save $12.4 million. 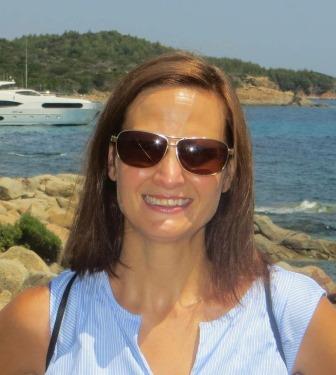 We are pleased to announce the appointment of associate professor Rachael Shwom as an associate director of the Rutgers Energy Institute (REI). Professor Shwom will be taking the place of Professor Robert Kopp, who will be assuming a new position as director of the Institute of Earth, Ocean and Atmospheric Sciences (EOAS) at Rutgers. Both Rachael and Bob will begin in their new roles July 1.

As associate professor in the School of Environmental and Biological Science’s Department of Human Ecology, Rachael conducts research that links sociology, psychology, engineering, economics, and public policy to investigate how social and political factors influence society’s responses to energy and climate problems. Since arriving at Rutgers eight years ago, Professor Shwom has actively participated in the REI and has served as a key member of its Energy Economics, Environment, and Policy Systems strategic planning committee. Rachael has also served on the Rutgers Climate Institute’s advisory committee and is currently a Co-PI on a multi-university, $1.5 million National Science Foundation grant on “Reducing Household Food, Energy and Water Consumption: A Quantitative Analysis of Interventions and Impacts of Conservation.” Since 2003, she has served on the American Statistical Association’s Advisory Committee to the Department of Energy’s Energy Information Administration. She served on the American Sociological Association (ASA)’s Task Force on Climate Change from 2011-2015 and of the Research and Publications Committee of ASA’s Environment, Technology and Society Section from 2015-2016.  Prior to coming to Rutgers, Rachael was a Christine Mirzayan Science Technology and Policy Fellow at the National Academies of Sciences and a Michigan State University Environmental Science and Policy Fellowship recipient (Ph.D., Sociology 2009). From 2001-2004, Rachael worked in the utility demand side management sector.

We also want to acknowledge the dedicated efforts of the outgoing associate director, Professor Robert Kopp. A professor in the School of Arts & Sciences’ Department of Earth & Planetary Sciences, Bob has served as an associate director of REI since arriving at Rutgers in 2011 and has played a crucial role in shepherding and developing the institute over the last six years. The REI is extremely grateful for Bob’s tireless commitment to understanding and solving our energy and climate challenges and educating the next generation. Our members and larger Rutgers community wish Bob the best and look forward to continuing to work with him in his new role as director of EOAS.